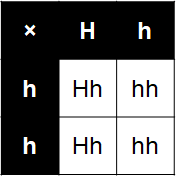 What is the probability that any two of the seven children will have Huntington's disease?

Based on our data, we think this problem is relevant for Professor Casselman's class at UAB.

Join thousands of students and gain free access to 10 hours of Genetics videos that follow the topics your textbook covers.