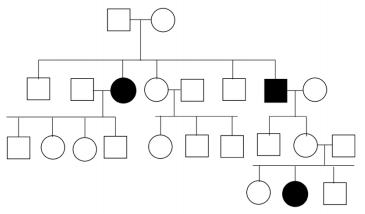 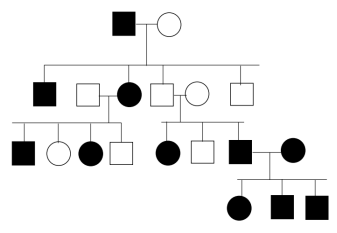 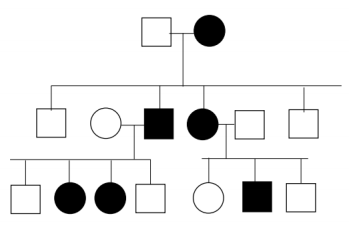 Which of the following statements about autosomal recessive traits is true?a. If neither parent expresses the trait, but the offspring does, both parents must be heterozygous for the trait.b. Only females can pass the trait to their offspring.c. If an individual expresses the trait, none of his or her offspring will express the trait.d. If an individual expresses the trait, then all of his or her offspring will also express the trait.
Refer to the figure below.This is a pedigree for a family in which several individuals develop a neurodegenerative disease late in life. If individual A has children with an unaffected woman, what is the probability that their first child will be affected? A) 0 percent B) 25 percent C) 33 percent D) 50 percent E) 100 percent
Galactosemia is a condition that affects how the body digests the sugar galactose. The most common form of galactosemia, type I, is the most severe, and it results from mutations within the GALT gene, which encodes for an enzyme that processes galactose. Galactosemia is inherited in an autosomal recessive pattern.If Patricia and Les have another child, what is the probability that they will have a daughter that is affected with galactosemia?
Which of the following is a possible mechanism of inheritance for the disorder presented in the pedigree?Select all those apply:• autosomal recessive• autosomal dominant• X-linked dominant• X-linked recessive
Purebred dogs are susceptible to many genetic disorders. Cocker spaniels, in particular, are prone to a disorder called canine phosphofructokinase (PFK) deficiency, an autosomal recessive condition in which glucose is unable to be metabolized into available energy. Because the PFK enzyme is important for energy metabolism in red blood cells and skeletal muscle during exercise, a deficiency in the enzyme results in exercise intolerance and muscle disease. Use the pedigree below, which shows the inheritance of PFK deficiency in cocker spaniels, to answer the questions.A. If A represents the allele for wild type PFK, what is Hank's genotype?B. What is the probability that Hank and Hazel's male offspring will be a carrier of PFK deficiency? Hazel's breeder has confirmed that she is not a carrier of PFK deficiency.C. What is the probability that Howey and Hailey's unaffected female offspring will be carriers of PFK deficiency?
Galactosemia is a human genetic disorder caused by a deficiency of the enzyme galactose-1-phosphate uridylyltransferase (commonly called GALT). Children with galactosemia seem normal at birth, but begin to show symptoms as soon as they drink milk. This is because they cannot metabolize galactose, a simple sugar that results from the breakdown of lactose (the sugar found in milk). Early symptoms of galactosemia include vomiting and diarrhea. If untreated, affected babies will develop enlarged livers, cataracts, and mental retardation. Depending on the alleles the baby has inherited, early death may result.Part A - Construct a pedigreeJohn and Jane Jones’ newborn baby girl, Leah, has just been diagnosed with galactosemia. Prior to their genetic counseling appointment, they submitted this family history:John and Jane’s older child, a son named Lee, does not have galactosemia.John is the only child of Hanna and Harry.Harry was an only child. Hanna has two older sisters, Hope (the oldest) and Holly.Both Harry and Hanna’s parents lived in good health into their 80s.Jane’s brother, Joe, is married to Jen. They have a son, Les, who is a healthy nine-year-old with myopia (nearsightedness) but no sign of galactosemia.Jane’s mother, Hilda, is alive and healthy; Jane’s father, Henry, passed away last year of a sudden heart attack. Hilda and Henry have no family history of galactosemia.Use the information in the family history to construct a pedigree for this family. Drag the correct symbols to their appropriate locations on the pedigree below. Not all symbols will be used. Part B - Identify the mode of inheritanceLook over the pedigree you constructed in Part A. Based on the inheritance pattern, which mode of inheritance must be the cause of galactosemia?a. autosomal recessiveb. autosomal dominantc. sex-linked recessived. sex-linked dominantPart C - Predicting the probability of inheritanceJane and John are considering having another child. Given the pedigree you constructed and the mode of inheritance for galactosemia, what is the risk that their next child will have the disorder?a. 1/4 (because they are both heterozygotes)b. 0 (because they already have one child with the disorder)c. 3/4 (because they are both heterozygotes)d. 1/16 (because they each have 1/4 chance of passing on the allele)Part D - Genetic testingIf Jane and John want to have another child, they plan to see a genetic counselor to find out when it would be best to test for galactosemia. A newborn with galactosemia must be put on a lactose- and galactose-free diet as soon as possible after birth. Even on this diet, affected individuals may still suffer from learning disabilities, ovarian failure (in young women), late-onset cataracts, and early death.Which of the following tests would be most useful for Jane and John to have?a. no testingb. newborn screening (either assaying for the GALT enzyme or measuring excess galactose in the newborn’s blood)c. carrier screening of Jane and John (to identify whether either or both of them carry the allele for galactosemia)d. fetal chromosome analysis (examining fetal chromosomes for abnormalities as early as 11 weeks into the pregnancy)
What information can be deduced from a pedigree? Select the TWO answers that are correct. A. the probability of a female being a carrier of an X-linked allele B. the probability of a parent or grandparent being infertile C. how autosomal traits contribute to X-linked traits D. how an X-linked trait is passed down over generationsE. the probability that Y-chromosome analysis will prove paternity

Join thousands of students and gain free access to 10 hours of Genetics videos that follow the topics your textbook covers.