See all sections
Learn
Next SectionBand of Stability

Radioactive reactions deal with the chemical instability of the nucleus in an atom.

In a typical stoichiometric reaction we begin with elements as reactants and end with the same elements in different forms as products.

In a nuclear reaction the number of protons in an element are affected and so the identity of the element changes.

We’re going to say here when it comes to nuclear reactions, we could think the British physicist Ernest Rutherford who really did a lot of experience with nuclear reactions. His contribution to nuclear chemistry was so great that they actually named element 104 after him. Element 104 is called Rutherfordium. It's kind of umbrage to all the work that he’s done in terms of this field.
Rutherford basically broke down nuclear reactions into three major types of categories. We have our alpha decay, instead of alpha decay you may hear alpha emission. We also have beta decay, which you may also hear as beta emission. Then finally, we have gamma emission. You tend to just hear it as gamma emission. You really don’t hear the term gamma decay.
What does the word decay or emit mean? That means that the radioactive particle will be a product. Remember, if you hear the word decay or emission, that means that the radioactive particle involved in all of these reactions will be a product. The opposite of decay or emitting would be the word capture. Capture would be the complete opposite. Capture would mean that the radioactive particle involved in each of these types of nuclear reactions would be a reactant.
In alpha decay, we emit an alpha particle. In beta decay, we emit a beta particle. In gamma emission, we emit a gamma particle. These particles are what cause our elements to go from one type to another type. What you have to remember is when they say decay or emission, they're saying that this alpha particle, beta particle, or gamma particle will be a product. But if you hear the term capture or even absorption, then that means that the alpha particle, the beta particle, and the gamma particle will be reactants. This has a profound difference on what exactly your products will be because you'll be emitting or decaying these particles along with a whole new element with it.
The farther into this chapter we go, we’ll learn that beyond these three, we also have positron emissions as well as electron capture. Those will come after we learned these first three major types. Just remember, in a regular chemical reaction, we start out with let’s say carbon, we end with carbon. But in the nuclear reaction, we’re emitting or capturing radioactive particles. As a result, that's going to change the identity of my element. You can start out with calcium and end up with something completely different like Argon.

In a radioactive decay or emission reaction the radioactive particle is ejected from the nucleus and forms a product.

In a radioactive capture or absorption reaction the radioactive particle is taken into the element and so is seen as a reactant.

An alpha particle is comprised of 2 protons and 2 neutrons.

An alpha decay or alpha emission occurs when an unstable nucleus ejects an alpha particle to create a new element.

Now, if you want to talk a little bit more about this alpha particle. We’re going to say: In terms of the size of radioactive particles, alpha particle is the largest.
So, it’s bigger than your beta particle, it’s bigger than your gamma particle. So, your alpha particle is the largest of them. It is the most damaging on biological cells because it has the highest ionizing power.
Which means that somehow, if you got it into your body, that it will just shred your insides. It will irradiate all of your biological cells in your body. A person who is exposed to an alpha particle internally has very low chance of survival. The good thing is, because it has the highest ionizing power, and because it’s so large, it’s extremely difficult for it to penetrate us. Penetrate our skins and get into ourselves.
So we’re going to say: They have the lowest penetrating power and can be stopped by clothing and by the air of our environment.
We’re going to say that our clothes, even the air around us provides protection against alpha particles getting into our bodies.
Now, how could you get an alpha particle inside of you? Maybe you work in a nuclear facility, where you have contaminated water or contaminated food or there was some chemical leak and it got exposed in our environment in some way and then you ingested it. But, it is extremely hard for things like this to occur. So, alpha particles are extremely damaging to our insides, but the good thing is they’re extremely hard to get into our bodies.

The alpha particle is one of the largest radioactive particles with the highest ionizing power, but lowest penetrating power. 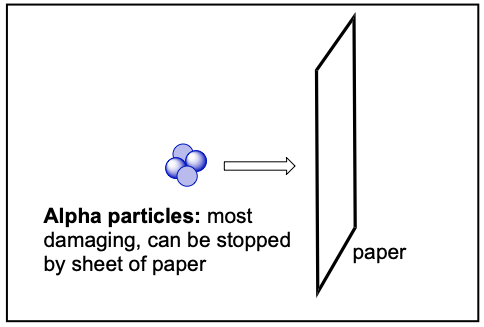 Example #1: Write balanced nuclear equations for each of the following alpha emissions.

A beta particle has no atomic mass and is represented by an electron.

A beta decay or beta emission occurs when an unstable nucleus ejects a beta particle to create a new element.

Beta particles are smaller in size, and therefore have more penetrating power. Luckily, they are less radioactively damaging because of their lower ionizing power. 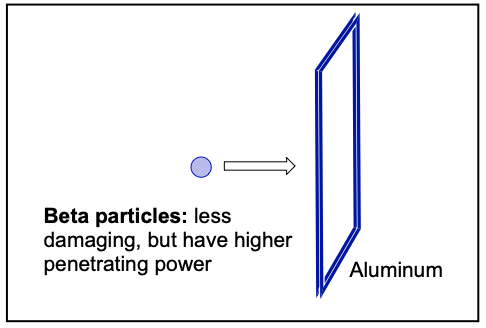 Example #2: Write balanced nuclear equations for each of the following beta emissions.

So, here we have to write the balanced nuclear equations for each of the following beta emissions, again, beta decay, beta emissions means that the beta particle will be a product, if they had said beta capture or beta absorption then it would be a reacted.
Example 1: So here were starting out with Magnesium 25, 25Mg so that’s the atomic mass.
On our periodic table Magnesium has an atomic number of 12.
1225Mg  -1 0e +1325Al
It’s going to emit a beta particle, -1 0e , so our new element that’s being created would still have the same atomic mass, and then here -1 + what number gives me 12? It’d have to be 13, because 13 - 1 gives me the 12 I started out with initially. So this element would be Aluminum (Al).
Now Ruthenium (Ru) 102, were going to say if we look on our periodic table Ruthenium has an atomic number of 44.
44102Ru  -1 0e +45105Rh
Again were going to emit a beta particle so this number stays 102 and this number it would have to be 45. So goes up to Rh.
Ok, so those are the examples of beta decays or beta emissions.

A gamma particle has no atomic mass and no atomic number and is represented by the sign gamma.

Gamma radiation is involved in the electromagnetic spectrum. Gamma rays possess the highest energy, while radio waves have lowest energy in terms of the spectrum.

The gamma particle does not create a new element like the other radioactive particles, but instead causes the excitation of electrons within an element.

Gamma Particles have lowest ionizing power, but are the most dangerous because of their highest penetrating power. 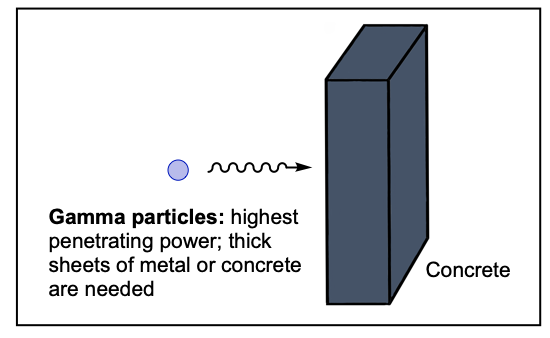 Example #4: Which of the following represents an element that has experienced a gamma emission?

Hey guys, in this new video, we’re going to take a look at electron capture. The word capture, we've been talking about this. There's decay and emission versus capture. Decay and emission means that your particle will be our product. But capture means it will be a reactant. Here we're talking about an electron. Remember, an electron is really just a beta particle. When we say electron capture, we’re really saying beta capture. They're both dealing with an electron. Beta decay, the electron will be a product. But in beta capture or electron capture, it'll be a reactant.
Here we’re going to say electron capture involves the absorption of an electron which remember, we saw as this symbol, by an unstable nucleus and is represented by the following reaction. Let's think of an example. We could deal with it francium, which is the metal most to the left and the lowest down group 1A. That’s Fr. Here we’ll say we’re dealing with isotope 223. Here capturing at this electron is not going to be a product, but it's going to be a reactant. We're going to have francium-223 and francium has an atomic number of 87. We're going to absorb an electron. What effect does that going to do? That's going to be 223 plus 0 gives me 223. Then 87 minus 1 is going to give me 86. It’ would become radon, Rn. That represents the opposite of beta decay. Instead of doing beta decay or emission, we're doing beta capture AKA electron capture.

In an electron capture or electron absorption reaction our electron particle is a reactant and not a product.

Example #5: Write balanced nuclear equations for each of the following elements after undergoing electron capture.

A positron particle is referred to as the anti-electron particle because it looks like a positively charged electron.

Hey guys! In this new video, we’re going to take a look at positron emission. Here, we're going to say positron emission occurs when an unstable nucleus emits a positron.
What's a positron? A positron is an antiparticle of the electron. Remember, the electron is represented by this. A positron is the opposite of that. It looks like an electron but instead of it having a negative sign, it'll have the opposite sign. It will be a positive electron. A positron is considered just a positive electron. I know this is weird but again, remember we're dealing with nuclear reactions. A lot of unaccustomed things that we are not used to seeing do occur. One of them is this positron. We’re going to say here, here’s our positron. Because we're talking about the word emission again, emission would mean decay which means that this positron would be a product.
Let’s think of an example. Here, Einstein has his own element named after him, Einsteinium. We’ll deal with isotope 253 of Einsteinium. Einsteinium is Es on our periodic table. It has an atomic number of 99. We're going to emit a positron and because we're emitting a positron, let’s see. Because the atomic mass is 0, the new element is still going to be 253. But because the bottom is one, what number plus 1 gives me 99? It’d have to be a 98. Here, that would just be Cf. This would be an example of a positron decay or positron emission.

A positron decay or positron emission occurs when an unstable nucleus ejects a positron particle to create a new element.

Example #6: Write balanced nuclear equations for each of the following positron emissions.

Example #7: A nuclide of Th-225 undergoes 3 alpha decays, 4 beta decays, and a gamma emission. What is the product?