Concept: The atomic masses of elements can be found on the Periodic Table.

Example: Which of the following represents an element from the first column with the greatest atomic mass?

Problem: In a naturally occurring sample, 19.8% of boron atoms have five neutrons and 80.2% have six neutrons.What is the mass number of a boron atom containing 6 neutrons?

We have to determine the mass number of boron atom that contains 6 neutrons.

Recall that the symbol of an element is written is this way:

• represents the identity of the element

• reveals the number of protons

• in a neutral element:

• reveals the number of protons and neutrons

In a naturally occurring sample, 19.8% of boron atoms have five neutrons and 80.2% have six neutrons. 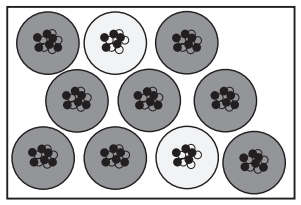 What is the mass number of a boron atom containing 6 neutrons?