Concept: The atomic masses of elements can be found on the Periodic Table.

Example: Which of the following represents an element from the first column with the greatest atomic mass?

Problem: Below is a representation of 50 atoms of a fictitious element called westmontium (Wt). The red spheres represent Wt-296, the blue spheres Wt-297, and the green spheres Wt-298.Calculate the percent natural abundance of Wt-298 isotope.

An isotope is a variant of a particular chemical element that has the same number of protons but has different number of neutrons. In other words, isotopes have identical atomic numbers but different mass numbers.

Most of the elements are mixtures of their isotopes and their average atomic masses are in fact the weighted averages of the atomic masses of individual isotopes.

Natural abundance is the percent abundance of an isotope as found naturally on the planet.

Below is a representation of 50 atoms of a fictitious element called westmontium (Wt). The red spheres represent Wt-296, the blue spheres Wt-297, and the green spheres Wt-298. 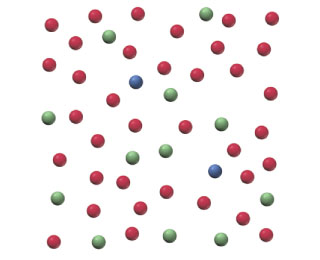 Based on our data, we think this problem is relevant for Professor Petrovich's class at NCSU.