Example: Determine all the possible Lewis structures possible for NO­2–. Determine its resonance hybrid.

Let’s start with the formulas for hydrogen carbonate ion and hydrogen peroxide.

Carbonate is a polyatomic anion with the formula CO32-.

Hydrogen carbonate is another polyatomic anion which has a hydrogen attached to the carbonate ion.

Peroxides are compounds of oxygen where oxygen is present as O22-.

For a compound, the two negative charges need to be balanced with two H+ ions.

To write Lewis structures of molecules, we will recall the following rules:

Let’s start by calculating the number of valence electrons. 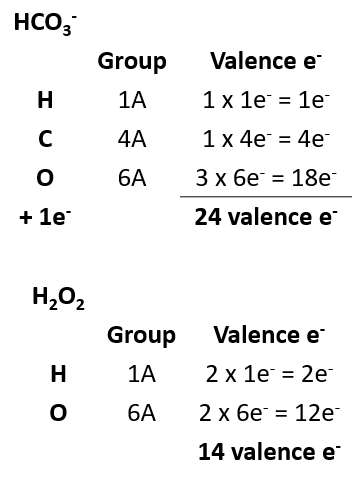 Learn this topic by watchingResonance Structures Concept Videos
All Chemistry Practice Problems Resonance Structures Practice Problems
Q.In terms of the bonds present, explain why acetic acid, CH3CO2H, contains two distinct types of carbon-oxygen bonds, whereas the acetate ion, formed b...
Q.Sodium nitrite, which has been used to preserve bacon and other meats, is an ionic compound. Write the resonance forms of the nitrite ion, NO2–.
Q.Write the resonance forms of ozone, O3, the component of the upper atmosphere that protects the Earth from ultraviolet radiation.
Q.Write resonance forms that describe the distribution of electrons in each of these molecules or ions.(a) selenium dioxide, OSeO
See all problems in Resonance Structures

Based on our data, we think this problem is relevant for Professor Brush's class at FSU.