We’re being asked to calculate the mass of NaCl formed when 50.0 g of sodium is used. We're given the following balanced reaction:

We don't know the amount of Cl2 used but we can calculate it based on the graph given. Each container has equal masses of chlorine gas (Cl2). We will use the part of the graph where the amount of NaCl produced becomes constant. This means that all Cl2 is used up.

After each reaction is complete, you collect and measure the amount of sodium chloride formed. A graph of your results is shown below. 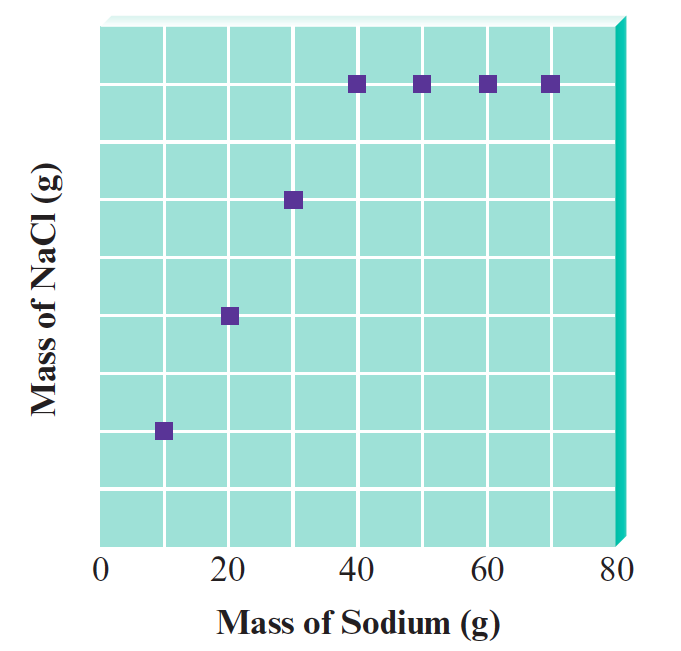 Calculate the mass of NaCl formed when 50.0 g of sodium is used.

Learn this topic by watchingLimiting Reagent Concept Videos
All Chemistry Practice Problems Limiting Reagent Practice Problems
Q.Outline the steps needed to determine the limiting reactant when 30.0 g of propane, C3H8, is burned with 75.0 g of oxygen.Determine the limiting react...
Q.What is the limiting reactant in a reaction that produces sodium chloride from 8 g of sodium and 8 g of diatomic chlorine?
Q.Sulfur dioxide gas reacts with sodium hydroxide to form sodium sulfite and water. The unbalanced chemical equation for this reaction is given below:SO...
Q.A potential fuel for rockets is a combination of B 5H9 and O 2. The two react according to the following balanced equation:2 B5H9 (l) + 12 O 2 (g) → 5...
See all problems in Limiting Reagent

Based on our data, we think this problem is relevant for Professor Fadeev's class at SHU.