Problem: A phase diagram is a pressure-temperature graph that shows the ranges of temperature and pressure over which each phase is stable. The phase diagram is divided into three regions, each region representing one stable phase: solid, liquid, or gas. There are three boundary lines that separate the phases from one another. These boundary lines represent the equilibrium between two phases. The point at which the three boundary lines intersect is called the triple point. All three phases can exist in equilibrium with each other at this point. Use the phase diagram for CO 2 and determine which of the following statements are correct. SELECT ALL THAT APPLY. All three phases of CO2 exist simultaneously at the triple point. When the pressure is 1 atm, there is no temperature at which the liquid phase of CO  2 exists. CO2 forms a supercritical fluid at temperatures less than 31 degrees Celsius. CO2 is a gas under normal conditions of temperature and pressure. Movement across boundary line BO corresponds to a phase change. When the pressure is 4 atm and the temperature is more than -56.7 degrees Celsius, CO  2 exists as a solid.

All three phases of CO2 exist simultaneously at the triple point.

Sign up for free to keep watching this solution

A phase diagram is a pressure-temperature graph that shows the ranges of temperature and pressure over which each phase is stable.

Use the phase diagram for CO 2 and determine which of the following statements are correct.

SELECT ALL THAT APPLY. 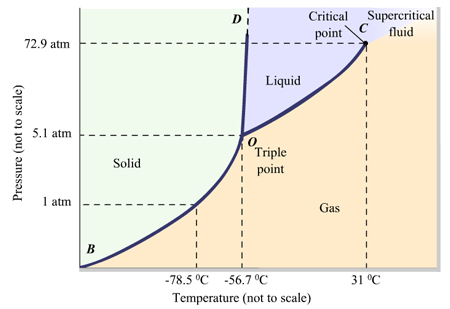 Learn this topic by watching Phase Diagrams Concept Videos
All Chemistry Practice Problems Phase Diagrams Practice Problems
Q. Which of the following states of matter is classified as a condensed phase?a) solidb) liquidc) gasd) Both a and be) Both a and b and c
Q. Sketch the phase diagram:Which of the following statements is true about the phase diagram above?I. The solid is denser than the liquid.II. The...
Q. Draw and label a phase change diagram.
Q. In the phase diagram of a substance shown to the right, fill in the blanks to make correct statements. a) Moving from point B to C results in a...
See all problems in Phase Diagrams

Our tutors rated the difficulty of A phase diagram is a pressure-temperature graph that shows t... as medium difficulty.

Our expert Chemistry tutor, Dasha took 6 minutes to solve this problem. You can follow their steps in the video explanation above.

Based on our data, we think this problem is relevant for Professor Donadio's class at UCD.

Example: At a temperature of 60ºC and 1.20 atm determine the physical state of the substance from the phase diagram shown above?