Example: Determine all the possible Lewis structures possible for NO­2–. Determine its resonance hybrid.

Which choice represents a pair of resonance structures? 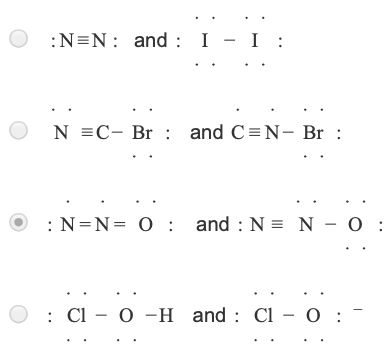 Three resonance structures can be drawn for NO3− (see the figure) because it is possible to have the double bond on any of the three oxygen atoms.

Which one is correct? Experiments show that all three bonds in nitrate have the same length This indicates that the electrons of the double bond have become delocalized, or spread out over all three oxygen atoms. Therefore, each oxygen atom forms one and one-third bonds. The actual structure is an average of all three resonance structures, as shown in the second figure.