Calculate the formal charge on each of the oxygen (O) atoms labeled a, b, and c in the following Lewis structure. 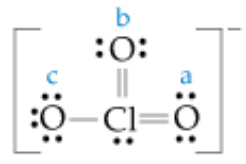 Express your answers as integers separated by commas.

The formal charge on an atom is calculated using the following formula: