Concept: Why is formal charge important?

The Lewis structure for the chlorate ion is 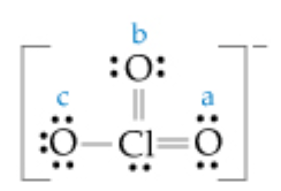 Calculate the formal charge on the chlorine (Cl) atom. Express your answer as an integer.

The formal charge on an atom is calculated using the following formula: