Example: Determine the formal charge of the nitrogen atom found within the ammonia molecule, NH3.

Part B. Consider the four resonance structures of the phosphate ion: 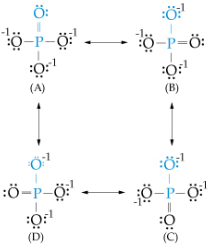 Calculate the average formal charge on a single oxygen atom, such as the one shown in blue, as it appears on all resonance structures, A to D.

Express your answer numerically as a decimal or fraction.

For example, consider the two Lewis structures for the sulfate ion (SO42−):