Part C. The structures of H2O, CO2, and CH4 are provided below along with the Pauling electronegativity values of C, H, and O. Use the figure and values to complete the following statements regarding the polarity of bonds in water, carbon dioxide, and methane. 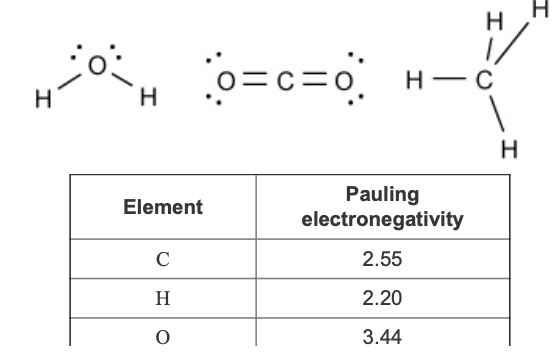 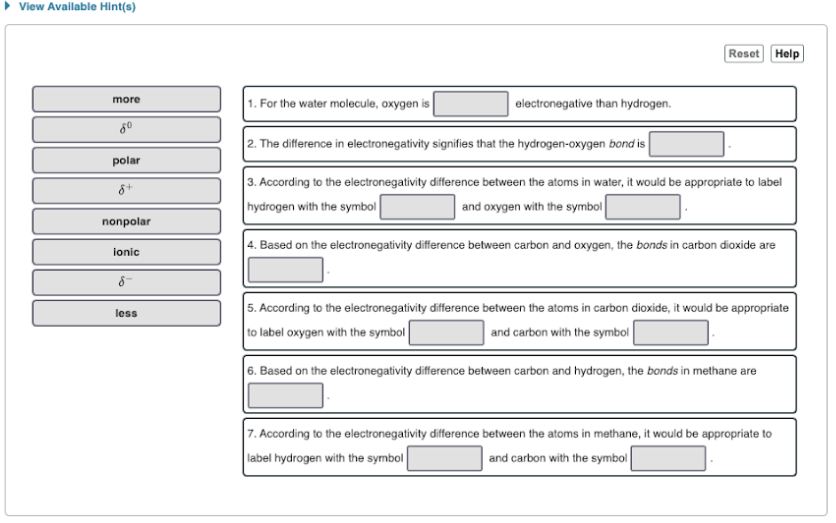 Match the words in the left column to the appropriate blanks in the sentences on the right. Make certain each sentence is complete before submitting your answer.

Learn this topic by watchingDipole Moment Concept Videos
All Chemistry Practice Problems Dipole Moment Practice Problems
Q.Part B. What the molecular shape (geometry) of CHClO?The Lewis structure for a molecule allows you to predict its shape, bond angles, and hybridizatio...
Q.Draw the Lewis structure for the following species, sketch their VSEPR, determine molecular geometry, and the polarity of each molecule.BF3
Q.For each bond, show the direction of polarity by selecting the correct partial charges.Te-OTe-SeO-SeThe most polar bond is
Q.Place the following in order of increasing dipole moment.I. BCl3 II. BBrF2 III. BClF2 A) I &lt; II = IIIB) II &lt; III &lt; IC) I &lt; II &lt; IIID) I...
See all problems in Dipole Moment