Carbon has four valence electrons in a configuration of 2s22p2 as shown in the diagram. For carbon to form four covalent bonds it must have four unpaired electrons. For carbon to have four unpaired electrons, hybridization must occur. If the s orbital and the three p orbitals were to combine, or hybridize, carbon could have four degenerate orbitals at an energy midway between the s and the p orbitals. The resulting orbitals are called sp3 because they are the combination of one s and three p orbitals. 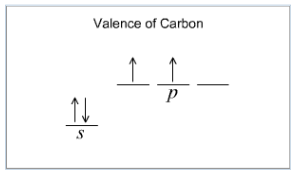