After doing some analysis, the probe determines that the gas pocket contains an element that has an ionization energy of I = 1527 kJ/mol and an electron affinity of EA = 33.0 kJ/mol. What is the identity of this element?

As part of the exploration of one of the moons of Jupiter, a probe digs under the surface, where it finds a pocket of gas. It starts to do some on-board experimentation. The data stored in the probe's computer include the following table of Mulliken electronegativity values, χ, of gases: 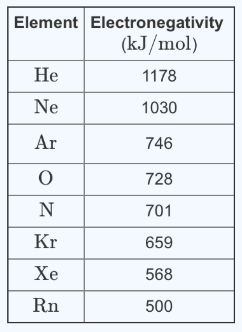 The definition of Mulliken electronegativity

where χ is the Mulliken electronegativity, I is the ionization energy, and EA is the electron affinity.

Based on our data, we think this problem is relevant for Professor Goff's class at UNC.