Problem: Classify the following compounds as having covalent or ionic bonds. Drag the appropriate compounds to their respective bins.calcium chloride, sodium bromide, aluminum oxide, carbon dioxide, magnesium nitride, dinitrogen trioxideChemical bonds are usually classified as either covalent or ionic. A covalent bond occurs when atoms share electrons. The resulting cluster of atoms is called a molecule, and the compound is considered to be molecular. An ionic bond results from a transfer of one or more electrons from one atom to another. This creates oppositely charged ions that group together into large macroscopic lattices as opposed to small clusters. For this reason, ionic compounds are not considered to be molecular. As a general rule, covalent bonds occur between two nonmetal atoms whereas ionic bonds occur between a metal and a nonmetal atom.

Classify the following compounds as having covalent or ionic bonds.

Drag the appropriate compounds to their respective bins. 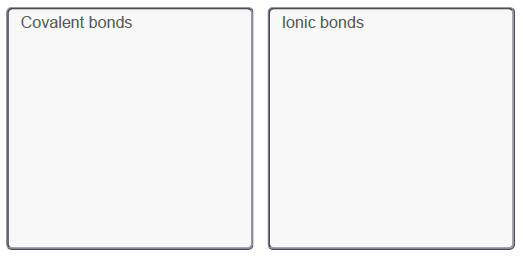 Chemical bonds are usually classified as either covalent or ionic.

Based on our data, we think this problem is relevant for Professor Huxford's class at SDSU.