We’re being asked to predict how the entropy of each substance is affected by the given process.

Recall that entropy is the degree of chaos or disorder of a system and that it depends on the following:

1. Phase: The gas phase has the highest entropy, followed by the liquid, and then the solid phase with the lowest entropy.

2. Complexity: More elements in the compound leads to higher entropy.

For a given process, entropy (ΔS) will either increase or decrease.

Remember that phase changes lead to a change in entropy: 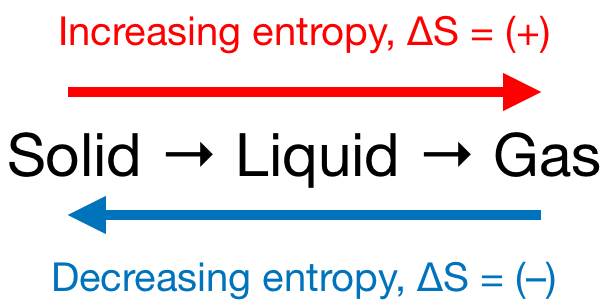 Predict how the entropy of the substance is affected in the following processes:

Which of the following reactions have a positive ΔSrxn? Check all that apply.

Our tutors have indicated that to solve this problem you will need to apply the Entropy concept. You can view video lessons to learn Entropy. Or if you need more Entropy practice, you can also practice Entropy practice problems.