🤓 Based on our data, we think this question is relevant for Professor Cheng's class at UCR.

(B) The total translational kinetic energy of 1.0 mole of diatomic oxygen at 50°C is:

We are asked to calculate the root-mean-square speed (vrms) of diatomic oxygen which has a molar mass that is 16 times that of the diatomic hydrogen at 50°C.

Recall that the root-mean-square speed is the measure of the speed of particles in a gas, defined as the square root of the average velocity-squared of the molecules in gas.

This is calculated as follows: 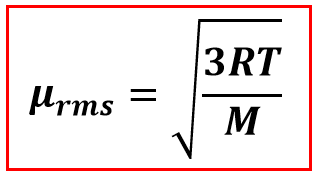