Problem: Two different gases occupy two separate bulbs. Consider the process that occurs when the stopcock separating the gases is opened, assuming the gases behave ideally.How does the process affect the enthalpy of the surroundings?

In this problem, we are asked about how the enthalpy of the surroundings is affected when the two gases are mixed together.

Enthalpy is a thermodynamic property that is defined as:

Where H is enthalpy, U is internal energy, p is pressure, and v is volume.

The system is the region in space that is subject to thermodynamic study. While the surrounding is everything that lies around the system.

To solve this problem, remember that:

ΔHsurr > 0: ΔHsystem < 0, the reaction is exothermic, heat is absorbed by the surrounding, heat is released by the system.

ΔHsurr < 0: ΔHsystem > 0, the reaction is endothermic, heat is absorbed by the system from the surrounding.

ΔHsurr = 0: ΔHsystem = 0, the reaction is neither endothermic nor exothermic, heat is neither lost nor gained.

How does the process affect the enthalpy of the surroundings? 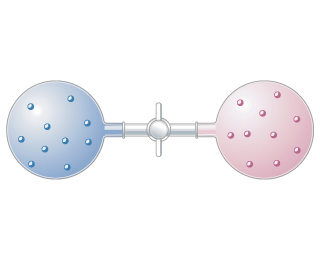 Learn this topic by watchingSpontaneous Reaction Concept Videos
All Chemistry Practice Problems Spontaneous Reaction Practice Problems
Q.Two different gases occupy two separate bulbs. Consider the process that occurs when the stopcock separating the gases is opened, assuming the gases b...
Q.Suppose you have a system made up of water only, with the container and everything beyond being the surroundings. Consider a process in which the wate...
Q.Consider the vaporization of liquid water to steam at a pressure of 1 atm.In what temperature range is it a nonspontaneous process?
Q.Consider a system consisting of an ice cube.Under what conditions can the ice cube melt reversibly?
See all problems in Spontaneous Reaction

Based on our data, we think this problem is relevant for Professor Van Dorn's class at ARIZONA.