Concept: The Characteristics of an Ideal Gas

We’re being asked which gas has the largest molar mass at 25 ˚C. 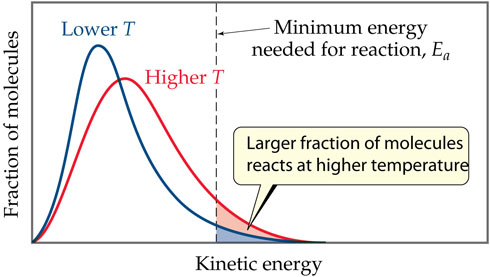 If there was a third, new temperature that would be graphed in green and would display the effect of a greater, even higher temperature than "Higher T" on the distribution of kinetic energies of molecules in a sample, describe the shape and relative height of this new green curve as it relates to the existing red "Higher T" curve in the graph.

Learn this topic by watchingKinetic Molecular Theory Concept Videos
All Chemistry Practice Problems Kinetic Molecular Theory Practice Problems
Q.Select the gas with the highest average kinetic energy per mole at 298 K.a. O2b. CO2c. H2Od. Are. all have the same average kinetic energy
Q.The temperature of a gas is a measure of a. the kinetic energy of the gas particles. b. the volumes of the gas particles.c. the amount of space betwee...
Q.Select the statement which does NOT apply to an ideal gas.a. There are no attractive forces between the gas molecules.b. There are strong repulsive fo...
Q.Which is most likely to be a gas at room temperature and ordinary atmospheric pressure, F2, Br2, K2O?
See all problems in Kinetic Molecular Theory

Based on our data, we think this problem is relevant for Professor Bartoszek Loza's class at OSU.