Example: Butane, a nonpolar organic compound, is most likely to dissolve in: a. HCl b. C6H5OH c. C8H18 d. AlCl3 e. What the heck is butane?

Problem: Consider the following values for enthalpy of vaporization (kJ/mol) of several organic substances.Account for the variations in heats of vaporization for these substances, considering their relative intermolecular forces.

We’re being asked to identify what accounts for the variation of enthalpy of evaporation of the given substance with intermolecular forces.

Consider the following values for enthalpy of vaporization (kJ/mol) of several organic substances. 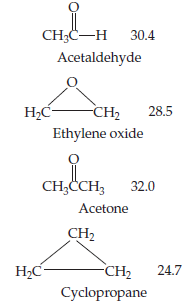 Account for the variations in heats of vaporization for these substances, considering their relative intermolecular forces.

Based on our data, we think this problem is relevant for Professor Gulacar's class at UCD.