Problem: Stabilization of an emulsion of oil in water by stearate ions.Which kind of intermolecular force attracts the stearate ion to the oil drop?

🤓 Based on our data, we think this question is relevant for Professor Gracia-Nava's class at UNR.

We need to determine what kind of intermolecular forces are present in an oil droplet and the stearate ion. 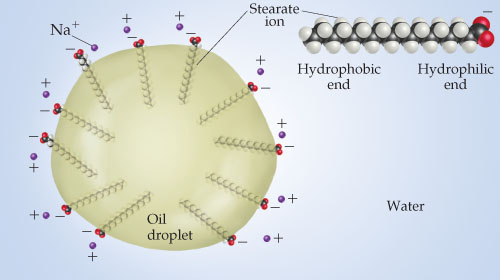 Stabilization of an emulsion of oil in water by stearate ions.

Which kind of intermolecular force attracts the stearate ion to the oil drop?

Learn this topic by watchingIntermolecular Forces Concept Videos
All Chemistry Practice Problems Intermolecular Forces Practice Problems
Q.Ball-and-stick models and Lewis structures for two hydrated hydronium ions.Which type of intermolecular force do the dotted lines in this figure repre...
Q.Indicate the kinds of intermolecular forces that would occur between the toluene and hexane:
Q.The table below lists the density of O2 at various temperatures and at 1 atm. The normal melting point of O2 is 54 K.Temperature (K)Density (mol/L)604...
Q.The table below shows the normal boiling points of benzene and benzene derivatives.Which of these compounds exhibit dispersion interactions?
See all problems in Intermolecular Forces
×