We’re being asked to identify the compound with the highest boiling point among the given choices.

Compounds with strong intermolecular forces have high boiling points. This is because they require more energy to be able to break the bonds during the phase transition.

So, we need to identify which among the given compounds has the strongest intermolecular forces.

For CH3CH2CH3: The total number of valence electrons present in CH3CH2CH3 is:

The Lewis structure of CH3CH2CH3 is: 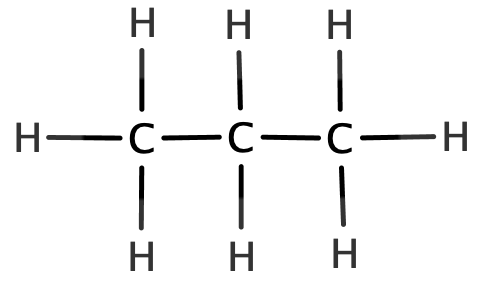 The electronegativity difference between C (EN = 2.5) and H (EN = 2.2) is 0.3 so the C–H bond is nonpolar, which means CH3CH2CH3 is a nonpolar molecule. Since CH3CH2CH3 is nonpolar, it exhibits dispersion forces.

Use specific examples from this list to illustrate how the heat of vaporization varies with molecular shape.

Based on our data, we think this problem is relevant for Professor March's class at UAB.