Problem: What kind of intermolecular attractive force is shown in each of the following cases?Picture (c)

We’re being asked to identify the intermolecular forces present in each compound.

Recall that there are several types of intermolecular forces:

For this problem, we will analyze each compound and then determine the intermolecular forces between the two compounds.

For the determination of the type of bond present, we will need to do the following steps:

Step 1: Determine the central atom in the molecule.

Step 3: Draw the Lewis structure for the molecule.

Step 4: Determine the polarity and IMF of the molecule.

What kind of intermolecular attractive force is shown in each of the following cases? 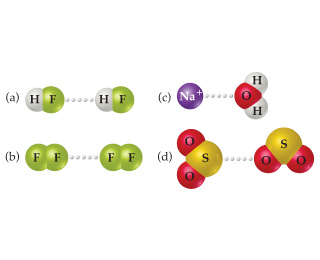