We are asked to determine the major factors responsible for the difference in boiling points of the two ethers: 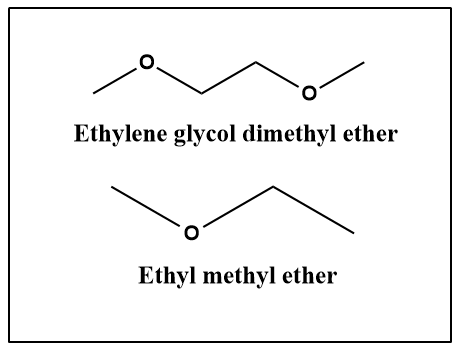 What are the major factors responsible for the difference in boiling points of the two ethers?

All Chemistry Practice Problems Intermolecular Forces and Physical Properties Practice Problems
Q.Hydrazine (NH2NH2 ), hydrogen peroxide (HOOH), and water (H2O) all have exceptionally high surface tensions in comparison with other substances of com...
Q.Ethylene glycol (HOCH2CH2OH), the major substance in antifreeze, has a normal boiling point of 198 oC. By comparison, ethyl alcohol (CH3CH2OH) boils a...
Q.Propyl alcohol (CH3CH2CH2OH) and isopropyl alcohol [(CH3)2CHOH], whose space-filling models are shown, have boiling points of 97.2 oC and 82.5 oC, res...
Q.Butane and 2-methylpropane, whose space-filling models are shown, are both nonpolar and have the same molecular formula, yet butane has the higher boi...
See all problems in Intermolecular Forces and Physical Properties

Based on our data, we think this problem is relevant for Professor Walker's class at TEXAS.