We are asked to explain why propyl alcohol has a higher boiling point than isopropyl alcohol. To explain this, we have to do the following steps.

Step 2: Examine the size of the molecules with the same intermolecular force

Step 3: Examine the branching of molecules of the same size

Propyl alcohol (CH3CH2CH2OH) and isopropyl alcohol [(CH3)2CHOH], whose space-filling models are shown, have boiling points of 97.2 oC and 82.5 oC, respectively. 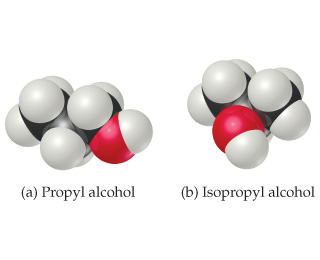 Explain why the boiling point of propyl alcohol is higher, even though both have the molecular formula of C3H8O.

Our expert Chemistry tutor, Shreya took 3 minutes and 31 seconds to solve this problem. You can follow their steps in the video explanation above.

Based on our data, we think this problem is relevant for Professor Kijewska & Pollock's class at MSU.