Problem: Glycine, an amino acid used by organisms to make proteins, is represented by the molecular model below.Calculate the percent nitrogen by mass in glycine.

We’re asked to calculate the percent nitrogen by mass in glycine based on its molecular model.

The  %N by mass in glycine can be calculated using the equation:

To do so, we need to determine the molecular formula of glycine and its molar mass.

First, we need to identify the element represented by each sphere based on its color.

Recall the color schemes used for a molecular model:

Glycine, an amino acid used by organisms to make proteins, is represented by the molecular model below. 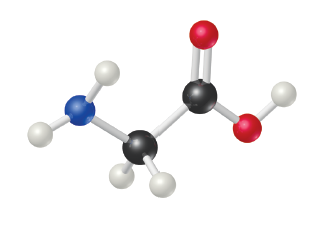 Calculate the percent nitrogen by mass in glycine.

Based on our data, we think this problem is relevant for Professor Czader's class at UH.