Phase Diagrams show what effect temperature and pressure have on a pure substance in a closed system without any air.

Concept #1: The Properties of the 3 Phases of Matter

Welcome back, guys. In this new video, we’re going to take a look at Phase Diagrams. Now,
We’ve talked about this way back in the beginning of the semester. We’re going to say under appropriate conditions of pressure and temperature, matter exists in three different forms. Matter can exist as a gas, a liquid or a solid.
Now, when it comes to each of these different states or phases of matter, they have different properties that are specific to them. So if we take a look here, we're going to have a microscopic explanation for the behaviour of all three phases.
We’re going to say gases, they assume the shape and volume of their container. If you have a large container, you input gas in there; the gases will spread out as far as possible to take up as much space as they can inside the container. We say that this is the gas behaving ideally.
Liquids assume the shape of the portion of its container it occupies, but not the volume, not always. Because let’s say we have a container that can hold a gallon of water and the gallon is shaped a specific way, but let’s say we don’t have a gallon of water. Let’s say we have only half a gallon of water and we pour it into the container. The water will take up half of the volume and take up the shape but it won’t be able to take up the rest of the volume because there’s not enough water. So water, liquids, always take up the shape but not necessarily the volume. If there’s not enough liquid, it won’t be able to fill up the entire container.
Solids are very stubborn. Solids maintain a fixed volume and shape. So you have a container, you dump a rock in there. The rock does not conform. It doesn’t change its shape to fit the container. It doesn’t try to fill up the container. It is what it is.
Now, compressibility, we’ve talked about this as well. Compressibility has to do with us being able to push down on the molecules that make up that phase.
Gases are highly spread out inside a container, but if I apply pressure, I can compress them, squeeze down so that those gas particles, gas molecules, get closer and closer together. So we’re going to say gases are highly compressible. I can increase the pressure and squeeze their molecules closer.
Now, liquids are not far apart. They’re right on top of each other but they’re fluid. They can move around each other. There’s not much space, not much free space between them. They’re rubbing up against each other. So we’re going to say that liquids are not really compressible. We might be able to squeeze a little bit but overall they’re not compressible because the molecules are already as close as they’re going to be. They’re just rubbing up against each other as they’re sliding around and moving around.
Solids, their molecules are frozen in place. They’re already as close as they’re going to be. They’re stacked on top of each other. So we’re going to say that solids are not compressible, not at all.
Then we’re going to say viscosity. Viscosity is just the resistance to flow. That means it doesn’t want to move. So we talked about this earlier too. If you make a comparison between a bucket of water and bucket of honey. So if you take the bucket of water and turn it upside down on someone’s head, the water is going to come right down and drench that person. But let’s say we have a bucket of honey. Honey moves a lot slower than water. Honey is more viscous, it doesn’t want to move as fast. So if I take that bucket and dump it over someone’s head, some of it might come out immediately but a good majority of it is going to take time to come out.
How do we decrease viscosity? If you increase the temperature, you’re going to excite the molecules. The molecules get faster, that honey will come flowing out faster. So if you increase temperature, you decrease viscosity.
So we’re going to say gases, gases are bouncing all over the place. They move incredibly fast, so they’re going to have low viscosity. They don’t have a resistance to flow. They want to move as fast as they can. Liquids have moderate viscosity. Depending on the liquid, they can flow fast or slow. And then solids really don’t flow, they’re just what they are. So solids have a high viscosity.
So these are each of the microscopic explanations of each of these phases of matter and remember especially the terms viscosity because these are the terms that you’re going to be associating with intermolecular forces and all the other things that we talked about when drawing a compound.

Associated with the three different phases are these properties but also what we call a phase diagram. We’re going to say this shows the effect that temperature, temperature down here, and pressure have on a pure substance in a closed system. So there’s no air entering the system. We’re going to say any substance, when we do a phase diagram we can look at its three phases. We can have its solid phase, its liquid phase. and its gas phase. And the phase diagram basically explains at such a temperature and such pressure, what phase will that matter exist as. Will it exist as a solid, a liquid or a gas at this particular temperature and this particular pressure? That’s all the phase diagram is really useful for.
And what we’re going to say is this phase diagram represents a compound and the only compound it doesn’t represent is water. Water is a very unique substance. If you think about it, if you freeze water, it becomes ice, right? Let’s say you take that ice cube and you dunk it into a cup of water. What usually happens is the ice cube actually floats on top of the water. This means that the ice, the solid, is actually less dense than the liquid. The solid ice weighs less, that’s why it’s able to float on the surface of the liquid. This is a weird phenomenon that happens only with water.
All other substances, when you freeze them to a solid and you drop them in their liquid form, the solid naturally just sinks to the bottom, which is what we expect, but water isn’t that way. And, again, why does water behave this way? Because of the H bonding that exists in water. The H bonding that exists between the molecules give them a certain orientation and when you freeze them, this orientation gets changed even further giving us a special shape. This special shape allows the solid to float on its liquid form.
So the phase diagram for water is different in this way. You see this line here? This line points towards the right. That signifies that this phase diagram is any compound except water. Water’s line points to the left. It’s the only one where that line is going to move towards the left. We’re going to say here, as the temperature and pressure increase, we’re going to say that the liquid portion becomes more dense. That’s what moving that line over to the left really signifies.
And we’re going to say how do we read this phase diagram? Well, we’re going to say a phase diagram again shows all three states. We’re going to say here, if we’re going straight from solid to gas, that phase change is called sublimation and that can happen. Carbon dioxide can go straight from a solid to a gas skipping the liquid phase altogether.
If we’re going from a gas to a solid, we’re depositing a solid so that’s deposition. If we’re going from a solid to a liquid, then we’re going to say that that is melting or what we call fusion. So remember fusion or melting mean the same thing. If we’re going from a liquid to solid, that’s freezing. If we’re going from liquid to gas, that’s vaporization. If we’re going from gas to liquid, that’s condensation. We should know all of these different types of phase changes.
Next, we’re going to say that let’s say that this is point A, point B, point C and point D. We’re going to say at point B, we have something called the triple point. At the triple point, the substance exists in all three phases. At that point, exists as a liquid, a solid and a gas, all at once, the triple point.
We’re going to say at point D, point D is called the critical point. The critical point is the last point on our phase diagram where our substance can exist as a liquid or a gas. If we go beyond the critical point, the substance becomes something entirely different. It becomes a substance that we can’t recognize. It becomes a substance called liquid plasma. The temperature is so high, the pressure is so high that the compound doesn’t look like a solid or a gas anymore. We can’t recognize it. It looks like liquid plasma. If you wanted to realize what does liquid plasma looks like just think of lava or maybe the sun. If you could like physically reach the sun and grab a chunk of it, that’s what liquid plasma would look like or lava will probably be the closest thing on earth that we can say liquid plasma looks like.
So again, the critical point is the last point at which we can still recognize the substance. Once we go a little bit beyond the critical point, we can’t tell if it’s a liquid or a gas anymore and it looks like something called liquid plasma.
And then we’re going to say that these other major portions of the phase diagram. So one, remember, that water has a different phase diagram from all other substances, and then to recognize the different points associated with the phase diagram. We have three phases of matter and the phase diagram just explains how temperature and pressure play a role on going from one phase to another phase.

The phase diagram looks at the transition of matter between the phases of solid, liquid and gas as temperature and pressure are affected. 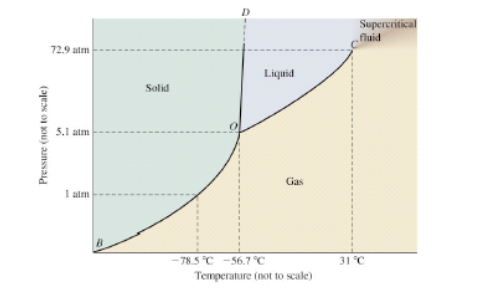 Answer the following questions based on the image above:

c. Which line segment represents an equilibrium between fusion and freezing? _____________

d. Which line segment represents an equilibrium between sublimation and deposition? _____________

e. Which line segment represents an equilibrium between condensation and vaporization? _____________

Concept #1: The Properties of the 3 Phases of Matter
Concept #2: Understanding the Phase Diagram
Practice #1: Answer the following questions based on the ima...
Previous SectionIntermolecular Forces
Next SectionHeating and Cooling Curves