A functional group can be thought of as a modification to an alkane carbon chain or ring and is identified by pi bonds or elements different from carbon or hydrogen.

Hey guys, in this new video, we're going to take a look at how exactly do we name different functional groups. Here the naming system that we use is called nomenclature. Here we can have naming systems for other types of functional groups. We already learned how to name alkanes, alkenes, and alkynes. But there are other groups that exist out there.
We're going to say it's similar to the previous naming experiences that we have done. We're going to find the longest carbon chain and change the -ane ending based on the functional group present. Here, again, if you have a tie in the longest chain, choose the one that gives you more substituents. Then we're going to say here, number the chain from the end closest to the functional group present and provide a name for its location.
Some functional groups don't need their location numbered because they are terminal, meaning they're found at the end. These functional groups would be carboxylic acids, they don't have to be numbered, esters, aldehydes. Their locations don't have to be stated because they're always found at the end. Here, same thing with substituents. If you have similar substituents then use numerical prefixes, so di-, tri-, tetra- and penta-.
When it comes to functional groups, we're going to say if they're present, they change the ending, the suffix, to these new names here. Basically, we would change the -e ending of the alkane name to -oic acid. Change the –e ending to -oate. Change the -e ending of the alkane to -al. Basically, in all of these, we're modifying the -e ending to one of these new endings. We'll see how that works. Then here we would modify -ane to -ene, like we saw earlier. We modify -ane to -ene. Then -ane is just -ane. Ethers we'd end the name with ethers. Alkyl halides, they don't form the end of the name.
A carboxylic acid, remember, a carboxylic acid can be seen as C double bond O, OH. You might even see it as COOH or your might see it as CO2H. These are the different ways we can see a carboxylic acid. An ester is a C double bond O connected to an O, connected to a C. You could have it written as COOC or CO2C. An aldehyde is a C double bond O connected to an H and it can also be written as this, CHO. That's the shorthand way of writing an aldehyde. A ketone is C double bond O connected to a C on both sides.
Notice that these first four all have this group in common, a C double bond O. That C double bond O has a name. That C double bond O is referred to as a carbonyl. It is not a functional group. It just belongs in a lot of different functional groups.
Here, alcohol is when you have a C connected to OH. That's just an sp3 carbon connected to OH. That's not to be confused with this carbon here that's also connected to an OH, but it also double bonded to an O. An amine is when you have a carbon single bonded to a nitrogen.
We've already seen alkenes, C double bond C, alkynes, C triple bond C, alkanes, C single bond C. Ethers are COC, not to be confused with an ester, which is also COC, but this C has a double bond O as well. Then an alkyl halide is just a carbon connected to a halogen. That halogen is usually represented by the variable X, so X represents fluorine, chlorine, bromine and iodine, groups in Group 7A, the halogen.
These are our major functional groups that you're expected to know at this point. Again, when you get to organic, you learn a few more functional groups that will be added to this list. Here this is just a list of priority. You'll learn more about priority when you get to organic one. Don't worry about it too much, just realize here those functional groups are present. They change the ending of the name.

Based on the functional group present the end of the alkane name can change. 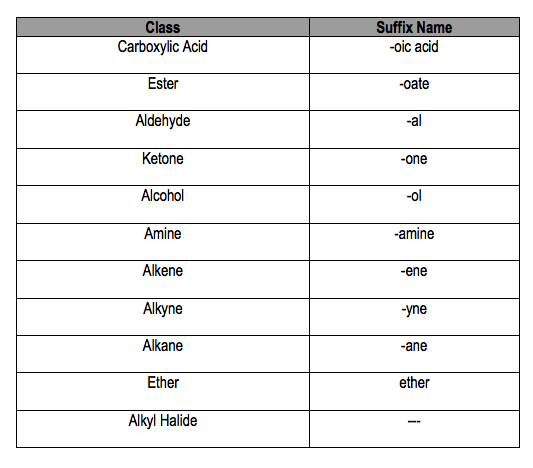 Example #1: Provide the name of the following alcohols and alkyl halides and state if they are primary, secondary or tertiary.

Example #2: Provide the name of the following functionalized organic compounds.

Let's take a look at the following example that was left on the bottom of the page. Here we have to provide the name of the following functionalized organic compounds. We should realize here in this first one that this is a carboxylic acid group. Remember for the carboxylic acid it changes the -e ending to -oic acid. And we said that carboxylic acids, we don't have to state the location of the carboxylic acid because it's always found at the end, so this would be one and this would be two.
Here two carbons is ethane, but we change the -e ending to -oic acid, so it becomes ethanoic acid. Ethanoic acid is the professional name, the systematic name as we would call it. It also has a common name. This is one of the most common weak acids that we know when we do ICE charts, it's common name would be acetic acids. So this is the way acetic acid really looks. Ethanoic acid is the formal, systematic name. Acetic acid is the common name.
Let's look at the next one. In the next one, this is an aldehyde. Again, an aldehyde like carboxylic acid, like an ester, you'll find at the end, so you don't have to state their locations. This would be one, two, three, four and five. Five carbons is pentane. Remember what we do here is change the -e ending to -al. So it's pentanal.
Then this one's a little bit trickier to see, but realize what we have here is a C double bond O connected to a C on either side. So this is a ketone. A ketone, we're going to change the -e ending to one. We want a number from the end closest to the carbonyl, closest to the C double bond O. So we're going to number it from this end.
Here it would be heptane. But remember, we change the -e ending to one, so it becomes hetpanone. That functionalized part of it is not found at the end, so we have to state the location of the carbonyl. For a ketone, you need to state the location of the carbonyl. We'd say here it's on carbon three, so this would be 3-heptanone.
That's the approach we take to name these. If you're still having trouble, make sure you go back and look at the list and see what exactly does the suffix name become based on the functional group present.

Example #3: Provide the name of the following functionalized organic compound.

Example #4: Provide the name of the following amines and state if they are primary, secondary or tertiary.

Example #5: Provide the name of the following ethers.

Example #6: Provide the structure of the following aromatic hydrocarbons.

Example #7: Provide the structure of the following aromatic hydrocarbons.

Hey, guys, let's take a look at the following question dealing with naming aromatic hydrocarbons. Here we have to name the meta-bromobenzoic acid. We know benzene's involved. Remember, meta means 1,3. Can say 1, 2, and 3. -Oic acid that must mean a carboxylic acid is on benzene. There it goes there. And then 1,3 means that bromo, Br, is right there on carbon three. Remember, carboxylic acid, highest in priority where it's attached is carbon one. This would be our structure.
Now that we've done those, let's see if you guys can draw this final structure here, 2,4,6-trimethylnitrobenzene. I'll give you guys a huge help here, nitro is just NO2. So it's just an NO2 group. Do your best to draw the structure.

Example #8: Provide the structure of the following aromatic hydrocarbons.