In general, meiosis is the cell division mechanism of sexually reproducing diploids to produce gametes. The aim of meiosis is to produce haploid gametes from diploid cells. This general process, however, is actually composed of two consecutive cell divisions: meiosis I and meiosis II. This results in 4 haploid daughter cells.

A. All the chromosomes were composed of one chromatid.

B. It has a metaphase plate.

D. All the chromosomes were composed of two chromatids.

E. There was only one copy of ech type of chromosome. 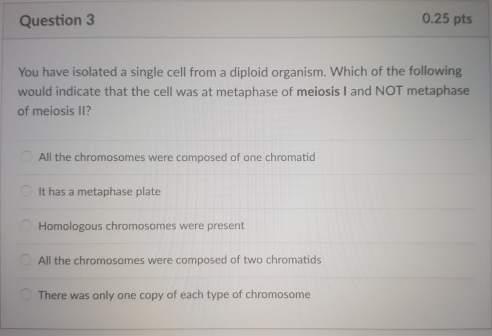 Learn this topic by watchingMeiosis Concept Videos
All Biology Practice Problems Meiosis Practice Problems
Q.The figure below shows four cells (A-D) that are undergoing meiosis. Match each cell to the phase of meiosis that it is currently in.A. InterphaseB. P...
Q.The A and B genes are on nonhomologous chromosomes. A zygote is formed by the fusion of a sperm with genotype AB and an egg with the genotype ab. The ...
Q.Would you expect to observe crossing over in the male 23rd pair of chromosomes? Explain.
Q.A crossover has occurred in the bivalent shown below:What is the outcome of this single-crossover event? If a second crossover occurs somewhere betwee...
See all problems in Meiosis

Our tutors have indicated that to solve this problem you will need to apply the Meiosis concept. You can view video lessons to learn Meiosis. Or if you need more Meiosis practice, you can also practice Meiosis practice problems.