The major pathway for nitrogen to enter an ecosystem is through nitrogen fixation. Certain bacteria, just like lightning and volcanic activity, can fix nitrogen naturally.

Which statement best describes the role of soil bacteria in nitrogen cycling?

B. They convert rock to ammonium, which is converted into nitrogen gas released to the atmosphere.

C. They convert nitrogen gas to amino acids, which are taken up by plants and recycled when they die.

D. They convert unavailable nitrogen into nitrogen that is available to plants, and back again. 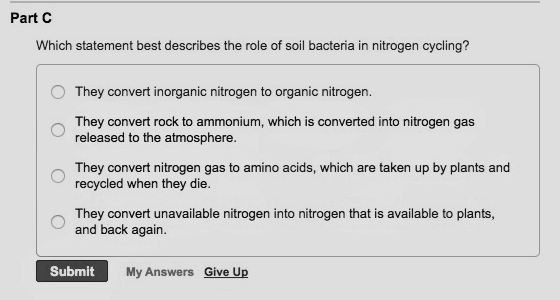 Learn this topic by watchingEcosystems Concept Videos
All Biology Practice Problems Ecosystems Practice Problems
Q.Define matter and energy, then the two types of energy.
Q.Most commercial fertilizers supply nitrogen both as ammonia or ammonium and as nitrate. Yet, plants are much more efficient at taking up nitrate in th...
Q.How does energy from the Sun drive the movement of water from the oceans to the continents and back to the oceans again?
Q.Which trophic level is most at risk from chemicals like mercury and DDT?A. Tertiary consumersB. Primary producersC. Primary consumersD. Secondary cons...
See all problems in Ecosystems