The construction of the pedigree is quite straightforward. Her father, who has two other siblings go to the left side of the figure.

Maria's maternal uncle suggested that Maria create a pedigree to track the disease in her family. Use the symbols provided to complete the pedigree. 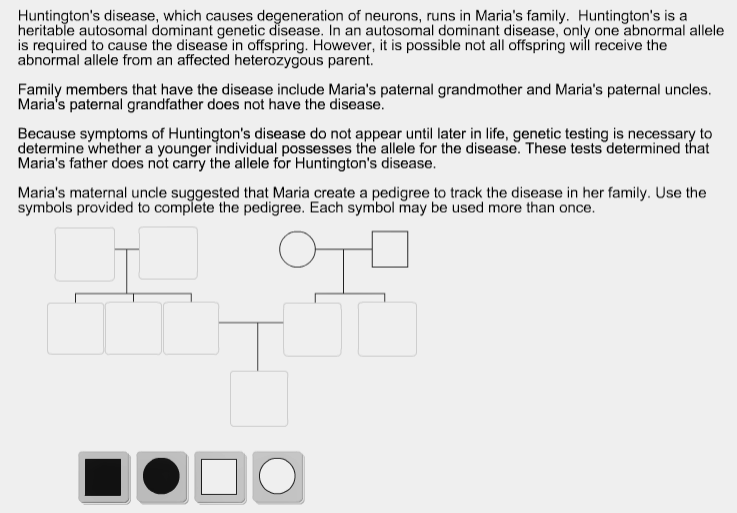 Learn this topic by watchingGenetic Counseling Concept Videos
All Biology Practice Problems Genetic Counseling Practice Problems
Q.Alpers' disease is a mitochondrially inherited disease with symptoms that include seizures, dementia, blindness, liver dysfunction, and cerebral degen...
Q.Suppose that Jess has mycotonic dystrophy and shows traits such as uncontrolled muscle activity. Jess's mother, Rose, is dystrophic, but her father is...
Q.If a male with an X-linked recessive disease mates with a female who is a carrier for the disease, what percentage of their male and female offsprings...
Q.A husband and wife have normal vision, although both of their fathers are red-green color-blind, an inherited X-linked recessive condition.A. Give the...
See all problems in Genetic Counseling

Based on our data, we think this problem is relevant for Professor Herrick's class at UCONN.