Below are the Punnet squares for each of the five genes:

Suppose two parents, a father with genotype AaBbCcDdee and a mother with the genotype aabbCcDDEe, wanted to have children. Assume each locus follows Mendelian inheritance patterns for dominance.

What proportion of the offspring will have each of the following characteristics? Round your answers to two decimal places.

A. same genotype as the father

B. phenotypically resemble the father

C. same genotype as the mother 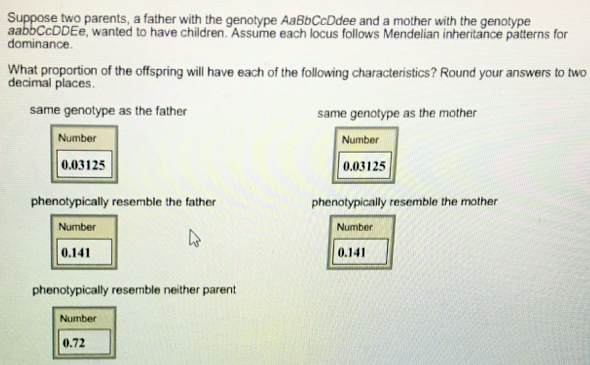 Learn this topic by watchingIndependent Assortment Concept Videos
All Biology Practice Problems Independent Assortment Practice Problems
Q.Imagine that two unlinked autosomal genes with simple dominance code in goats for size where L is large and l is small, where B is brown and b is whit...
Q.Contrast genes that are Independently Sorted verses those that are Linked.
Q.In the garden pea, Mendel studies independent assorting genes and found that purple flowers (P) are dominant over white (p) and axial flowers (A) are ...
Q.In guinea pigs, rough coat (R) is dominant over smooth coat (r). A rough coat-coated guinea pig is bred to a smooth one, giving 8 rough and 7 smooth p...
See all problems in Independent Assortment

Based on our data, we think this problem is relevant for Professor Peters' class at MSU.