To confirm the semiconservative model of replication, it was important for Meselson and Stahl to quantify the amount of DNA in each band produced by density-gradient centrifugation. To accomplish this, they took advantage of the fact that DNA absorbs ultraviolet light, and used UV light to photograph each tube. By scanning the UV photographs with a microdensitometer, graphs like the ones below were produced. The height of each peak in the graph is directly proportional to the concentration of DNA in the corresponding band. Also, the position of each peak reflects the 14N and 15N content of the band. Suppose that the scientists analyzed the same amount of DNA (10 units) by density-gradient centrifugation after two, three, and four rounds of replication in 14N medium. What would you predict the microdensitometer graph would look like after each round? The beginning of the experiment as well as Replication Cycle 1 is given to you. Match up replication rounds “A”, “B” and “C” in the correct order with Replication Cycles 2, 3 and 4. 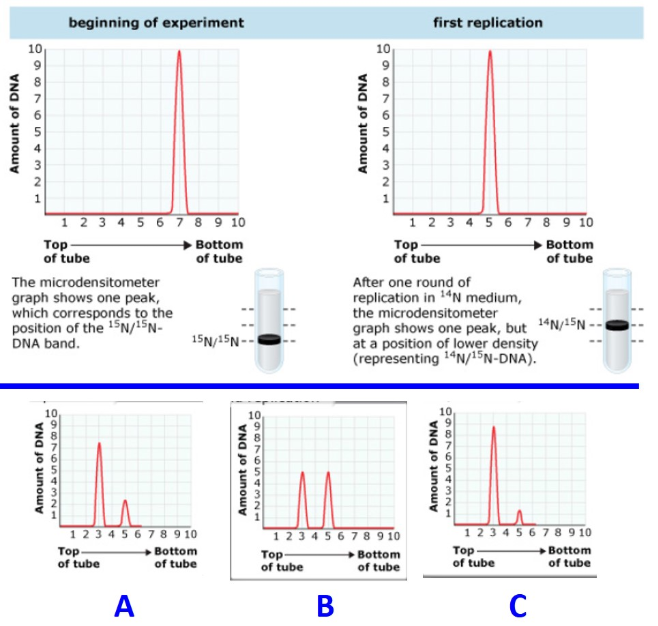 Match up replication rounds “A”, “B” and “C” in the correct order with Replication Cycles 2, 3 and 4.

Learn this topic by watchingMeselson-Stahl Experiment Concept Videos
All Biology Practice Problems Meselson-Stahl Experiment Practice Problems
Q.Although both RNA and RNA are built from nucleotides, describe how the RNA nucleotides differs from the DNA nucleotide. Briefly explain RNA function.
Q.The figure below is a DNA replication bubble. The leading and lagging strands of the following DNA replication figure are labeled. Instructions: Label...
Q.The diagram below shows a bacterial replication fork and its principal proteins. Drag the labels to their appropriate locations in the diagram to desc...
Q.Compare and contrast DNA with RNA. Identify 2 similarities and 2 differences between DNA and RNA.
See all problems in Meselson-Stahl Experiment

Our tutors rated the difficulty ofTo confirm the semiconservative model of replication, it was...as high difficulty.

Our expert Biology tutor, Kaitlyn took 11 minutes and 30 seconds to solve this problem. You can follow their steps in the video explanation above.

Based on our data, we think this problem is relevant for Professor Waletzko's class at OSU.