A researcher discovered a species of moth that lays its eggs on oak trees. Eggs are laid at two distinct times of the year: early in spring when the oak trees are flowering and in midsummer when flowering is past. Caterpillars from eggs that hatch in spring feed on oak flowers and look like oak flowers. But caterpillars that hatch in summer feed on oak leaves and look like oak twigs.

How does the same population of moths produce such different-looking caterpillars on the same trees? To answer this question, the biologist caught many female moths from the same population and collected their eggs. He put at least one egg from each female into eight identical cups. The eggs hatched, and at least two larvae from each female were maintained in one of the four temperature and light conditions listed below.

Refer to the accompanying figure below. Which one of the following is NOT a plausible hypothesis to explain the differences in caterpillar appearance observed in this population?

a. The cooler temperatures of spring trigger the development of flower-like caterpillars.

b. The longer day lengths of summer trigger the development of twig-like caterpillars.

c. Differences in air pressure, due to differences in elevation, trigger the development of different types of caterpillars.

d. Differences in diet trigger the development of different types of caterpillars. 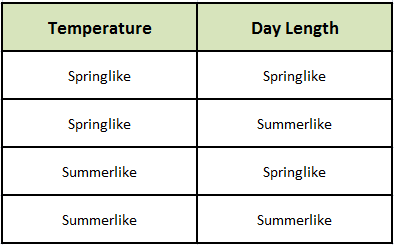 Our tutors rated the difficulty ofA researcher discovered a species of moth that lays its eggs...as high difficulty.

Our expert Biology tutor, Kaitlyn took 9 minutes and 42 seconds to solve this problem. You can follow their steps in the video explanation above.

Based on our data, we think this problem is relevant for Professor Colon's class at VALENCIA.