Problem: Below is a phylogeny depicting the relationships of nine species of extant beetles, labeled 1-9. A 'P' above their number indicates that the species is poisonous, and an 'NP' indicates that the species is non-poisonous. Some of the ancestor species are also labeled, A-D. Which of the following statements is most likely accurate regarding this group of species?a. Ancestor A was the first beetle to possess the poison trait.b. That both species 8 and species 4 possess the poison trait is an example of convergent evolution.c. The poison trait evolved independently four different times.d. Ancestor D likely possessed the poison trait.

a. Ancestor A was the first beetle to possess the poison trait.

b. That both species 8 and species 4 possess the poison trait is an example of convergent evolution. 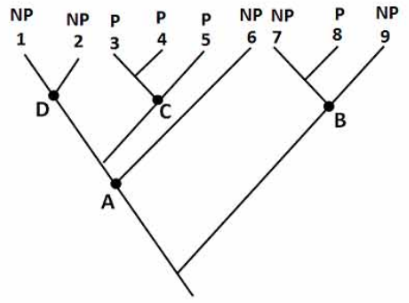 Learn this topic by watchingPhylogeny Concept Videos
All Biology Practice Problems Phylogeny Practice Problems
Q.Which statement represents the best explanation for the observation that the nuclear DNA of wolves and domestic dogs has a very high degree of homolog...
Q.According to the chart below, the dotted lines labeled X and Y represent thea. endosymbiotic origin of the mitochondria and chloroplast, respectively....
Q.According to the figure below, we would expect gene and protein sequences from mice to be most different from those ofa. rats.b. humans.c. birds.d. fi...
Q.The sister taxon to Tarsius isa. Lemurb. Callithrix    c. New World Monkeys d. all other speciese. all the other species except Lemur
See all problems in Phylogeny

Our tutors rated the difficulty ofBelow is a phylogeny depicting the relationships of nine spe...as high difficulty.

Our expert Biology tutor, Kaitlyn took 14 minutes and 31 seconds to solve this problem. You can follow their steps in the video explanation above.

Based on our data, we think this problem is relevant for Professor Lee's class at USF.