We can base our answers from the given graph: 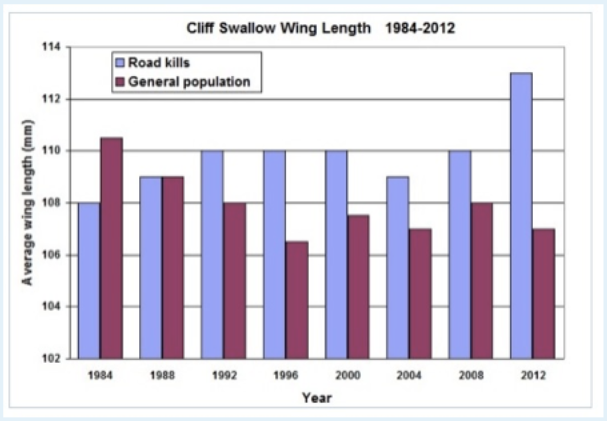 Cliff swallows are birds that often build nests under a highway overpass or on a bridge, they are very common on MO and KS roads.

Swallows build nests from mud, and the edges between the horizontal overpass and vertical walls are ideal locations for their nests. Unfortunately, these locations also make cliff swallows vulnerable to being hit by cars and trucks.

The graph below shows the data collected on the shape and length of the cliff swallows' wings. 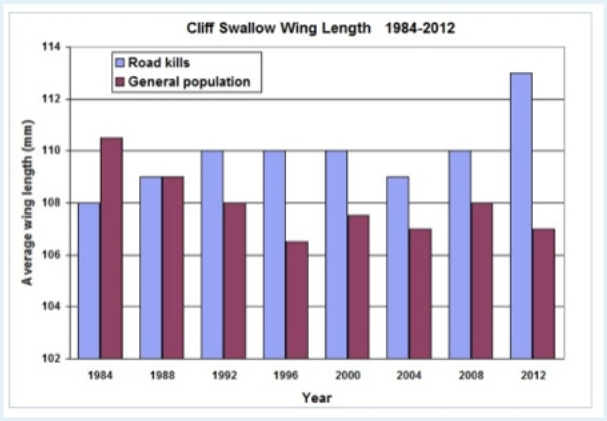 Drag the terms below to the appropriate blanks on the right to complete the sentences.

2. During the same time period, the wing length of cliff swallows killed on the roads generally _____.

3. In most years where data was collected, the wings of cliff swallows killed on the roads were _____ than the wings of swallows found in the population at large.

4. Shorter wings allow cliff swallows to take off from the ground more vertically, enabling them to better avoid oncoming cars. As a result, cliff swallows in populations near highways with _____ wings have a survival advantage.

5. The data suggest that, over time, _____ resulted in the evolution of shorter wings in the cliff swallow population.

Learn this topic by watchingDescent with Modification Concept Videos
All Biology Practice Problems Descent with Modification Practice Problems
Q.Mothers and teachers have often said they need another pair of eyes on the backs of their heads. And another pair of hands would come in handy in many...
Q.Fitness is a measure of an organisms ability to survive and reproduce.a) Trueb) False
Q.Which conditions are required for natural selection to occur?1. Traits are heritable; offspring resemble parents 2. Traits are coded for by dominant g...
Q.Identify the four postulates of natural selection. Select all that apply. a) All individuals in a population have equal reproductive success.b) Indivi...
See all problems in Descent with Modification