Indirect Gene Flow: occurs via an intermediate population (X mates with Y. Y mates with Z. There is gene flow between X and Z via Y)

The biological species concept defines a species as a group of populations whose members have the potential to interbreed in nature and produce viable, fertile offspring. This means that all members of these populations can contribute to a common gene pool. These populations belong to the same species. Genes are transferred between these populations through both direct and indirect gene flow.

Biologists studying disease susceptibility in mice used genetic techniques to look for gene flow in 12 wild populations of mice. The populations (designated A through L) were located along a 210-km transect line. 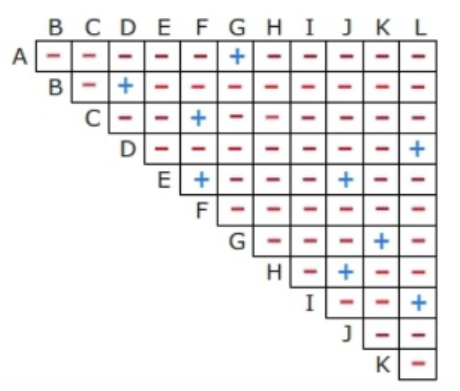 The researchers discovered that the 12 populations could be organized into 3 distinct species. Populations A, B, and C each belong to a different species. Use the data in the grid to sort each population to the species to which it belongs. D, E, F, G, H, I, J, K, L.

Learn this topic by watchingGenetic Variation Concept Videos
All Biology Practice Problems Genetic Variation Practice Problems
Q.Which of the following statements about genetic drift are true?a. Genetic drift occurs more slowly and has a greater effect in small populations, as c...
Q.Generation-to-generation change in the allele frequencies in a population is ________ . a) mutation b) natural selection  c) microevolution d) genetic...
Q.Which processes lead to most genetic variation in sexually reproducing organisms? Select all that apply.a) random fertilization b) cytokinesis c) cros...
Q.The mode of natural selection in which one extreme phenotype is fittest and the environment selects against the others is: a.  Directional selectionb....
See all problems in Genetic Variation